It has been almost a year since the previous Artistic Director of Théâtre la Seizième, Craig Holzschuh, left the company. Holzschuh planned the 2016/2017 season and I know that he would have loved to finalize what he started and produce Bonjour, là, bonjour.

There is lots to say about this Michel Tremblay’s masterpiece which he personally considered to be his best work but if you ever think your family is dysfunctional, this will give you some pretty interesting perspective.

Despite the difficult plot and what could be considered as a confusing direction – we don’t always know who is talking to whom and where – Théâtre la Seizième did a bang-on job on producing this provocative and pointillistic piece exploring family dynamics, secrets and hidden passions.

Revealing the secret slowly at the heart of Bonjour, là, bonjour was key to make us appreciate all the subtleties suggested throughout the play and giving out the characters’ relations too early would have spoiled the effect intended.

Kudos also to Drew Facey for the stunning set design which featured a floor-to-ceiling, random stack of old wooden chairs.

A must see / À voir absolument! 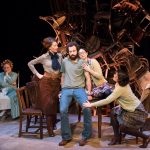