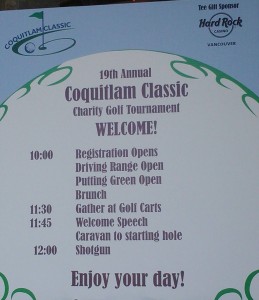 Wednesday July 9 2014, was a magnificent day for the 19th Annual Coquitlam Golf Classic which was held at the Westwood Plateau Golf & Country Club.  For the second consecutive year, I was fortunate enough to be able to take part in this Charity Golf Tournament which raises funds to promote culture and history in the city of Coquitlam and to help socio-economically disadvantaged families by giving their children a chance to explore and enjoy the creative arts.  This exploration includes music,  the visual arts, dance, drama and acrobatics.

You may recall that I was on this very same golf course few weeks ago for the Tri-Cities Chamber of Commerce Golf Tournament and in truth, I will never have enough of the spectacular mountain setting at Westwood plateau and the fun atmosphere of this type of event.

On this particular morning,  the golfers were warmly greeted by an outdoor, full English breakfast. There were no muffins or scones as there are in many other golf tournaments, but bacon, eggs, sausages, potatoes and fruits as well as a light Canadian touch…the cream cheese bagel.

At shot gun, the golfers went to their designated starting holes in anticipation of a day filled with surprises, gifts, fun and sport. I thrilled to be in one of the volunteer floating teams and as a result, I had the chance to experience everything the day had to offer.

Coquitlam Centre started things off on a high note and was waiting at hole #1 with an ice cream bar and a chance to win an iPad. In our determination to meet with every sponsor and to give breaks to our volunteers, we weren’t able to spend as much time as we would have wanted at each hole but some of them were too tempting and deserved some extra attention.  At hole #4, Brianna and Chehaila from White Spot offered fresh, full size juicy burgers. Sandra and Luke played poker with golfers at hole 10 to raise extra funds for the Coquitlam Maillardville Heritage Trust and  Shaw Communications made their hole 14 a comfortable, enjoyable and amusing place. 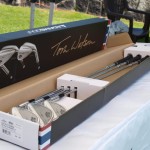 I have been to and have organized many golf tournaments in the past 5 years and I can say that this tournament was top-notch! From the putting green contest where participants were given their three magnificent putters as their Tee Gift (see photo on the right) to meeting with Darcy Rota who is a retired professional ice hockey player. Golfers were charmed, challenged and well entertained.

The open bar was also greatly appreciated by the players and even more so as they knew that they could return home safely thanks to the complimentary taxi service that was provided that night. 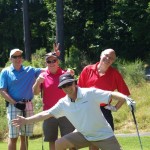 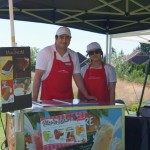 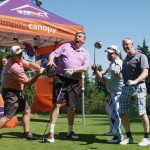 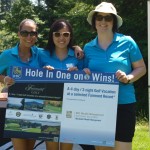 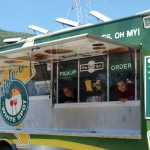 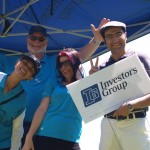 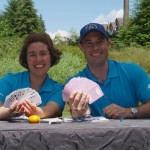 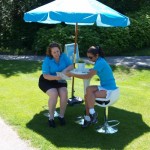 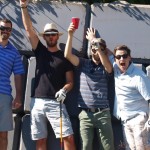 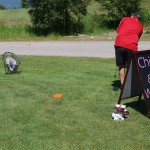 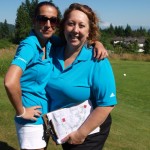